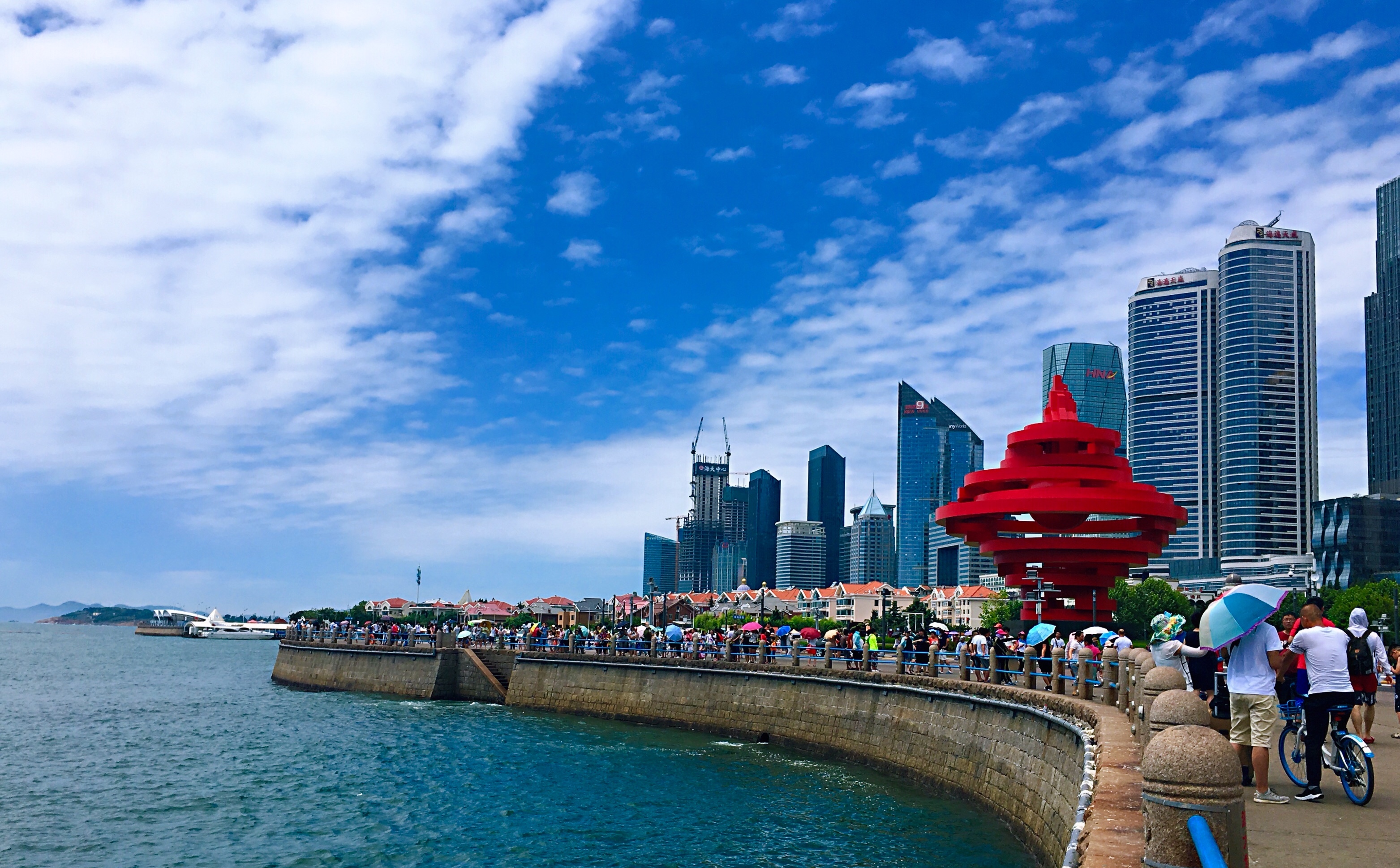 Qingdao, located in the southeast part of Shandong Province, is a beautiful seaside city with clear air and enchanting sea views. This city, bordered by the Yellow Sea on two sides, has the largest bathing beach in Asia and produces the mellow Tsingtao Beer. To the east of the city, a short distance across the Yellow Sea, lies Korea and Japan, making the city an important port for international trade. The world’s longest sea bridge, the Jiaozhou Bay Bridge, links the main urban area of Qingdao with Huangdao district, straddling the Jiaozhou Bay sea areas. The red roofs, green trees, blue sea, and azure sky form a bright and colorful picture here. The city is sometimes known as the Switzerland of the Orient.

Qingdao attracts many tourists due to its seaside setting and temperate weather. Parks, beaches, sculptures and unique German and modern architecture line the shore. Sights like the Wusi Square, Mt. Laoshan, Golden Sand Beach, Badaguan Scenic Area will help you remember the city. Other major attractions like Xinhao (Signal) Hill Park, Catholic Church (St. Emil Church), Small Qingdao Island, Lu Xun Park, and Underwater World are also worth a visit. Just walking on the sand and listening to the surf breaking on the beach becomes enjoyable.

The food here is with distinctive flavors–, especially seafood. So take your chance to enjoy the delicious seafood. Also, to enhance the tourism industry, the city now sponsors the International Beer Festival, the International Sea Festival, Beach Culture Festival, the Sea Affection Festival, and the Summer of Qingdao Festival. Do not forget to try the famous Tsingtao Beer when visiting the city.

In 2016, Qingdao ranks 79th in the Global Financial Centres Index published by the Z/Yen Group and Qatar Financial Centre Authority. In 2007, Qingdao was named as among China’s top ten cities by the Chinese Cities Brand Value Report, which was released at the 2007 Beijing Summit of China Cities Forum. In cooperation with the Beijing Olympic Games 2008, the city held the Sailing Competition in the Olympic Games in 2008. In 2009, Qingdao was named China’s most livable city by the Chinese Institute of City Competitiveness.

Learn more about things to do in Qing Dao Click Here

1. Who is eligible to apply?
High school and college students. If you are under 18 when you apply for the on-site program, we will also need consent from your parent or guardian.

2. How can I apply the program?
Step 1: Complete the Application Form Eligibility
Step 2: Finish the Interview • Our Admission mangers will arrange an interview with you about 1-2 weeks after we received your application. • The interview will be an about 30-minute phone or video call during which we will assess your potential fit for a placement in the physician shadowing in China program.

3. When should I apply?
You can apply for the program 30 days before your start date, but we encourage you to apply as soon as you know you are interested in our shadowing program. If you apply before Oct 1st for Winter Program and Mar 1st for summer program you will receive a $200 discount.

4. How much does it cost?
It depends on the weeks you will shadow. Please see the details on our PRICE page.

5. What’s included in the price?
Our prices include all you need when you shadow in China: including your hospital placement, health tutorials, accommodation, translator, all meals, dorm, clean lines, airport pickup and send, transfer on arrival, local orientation, in-country support, help with your preparations, and a comprehensive online trip planner—there’s more detail about all of these on our prices page.